For six months, I managed to produce a weekly podcast  (ICO 41)  that analyzed crypto-currency and blockchain projects from the perspective of techology and business.  Then I took a break for a few months to build some software for the space, (KryptoTrak)  and then I returned to the podcast for an episode or two ... and I think I'm done for now.

The thing is, I still really believe in the underlying technology.  It can and will undoubtedly help to mitigate and maybe even solve a lot of problems, like the "unbanked," destitute countries that can barely support a banking system, outrageous transaction fees by financial institutions, as well as obscure and unfortunate phenomena like the Incels vs. Sex Workers war, where women (mostly) are being forced off payment platforms like PayPal and others, thereby preventing their ability to scrape by in this new economic Age that practically makes the Gilded look like a commune: 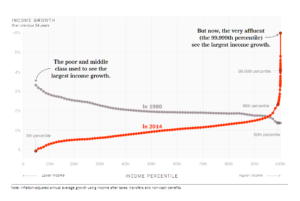 However, I originally started the podcast because I was fascinated by the phenomenon of the Initial Coin Offering, where idealistic engineers sidestepped the traditional fundraising method of prostrating themselves at the court of Silicon Valley Venture Capital and begging for the favor of an audience ... and a few million as well to get started with their idea. Instead, they appealed directly to potential investors using the issuance of a crypto currency, more often than not based on Ethereum, and collected billions of dollars without a drop of VC money - at least in the beginning. Now, of course, the majority of investment in successful ICO's is from "whales," thereby turning on its head the idea of an egalitarian and decentralized investment profile.

And it was indeed fascinating, especially in 2017. Some projects, like Lamden and a few others seemed laudable and sincere, but most turned out to not be that way at all.  Many turned out to be outright scams, and even those that were probably not outright scams seemed to be just skating the edge of sincerity. And as I attended conferences, where I got to meet at least some of the representatives of some of these ICO's, it became slowly obvious to me that there was a deep current of fraud and cynicism running through the whole space.

It's not like I had a LOT of exposure (for instance, I wasn't unfortunate enough to be trapped on a boat with them for four days), but I had enough to sense it.

Presently, with the crash of Bitcoin, as well as various SEC enforcement actions against some of the more egregious ICO's, the ICO market has dramatically slowed.  This is probably a good thing.  There is no reason I can think of for what amounts to a software project to be funded in the tens of millions ( or hundreds ... or even billions ..) of dollars.  Hopefully, now that saner times may prevail, sincere and hard-working people will be able to raise adequate funds, instead of amounts that are so high that greed is the inevitable result. Maybe we will start to see grass-roots projects appear to solve real problems, instead of a gold-rush mentality rife with ridiculous projects designed to do nothing more than part stupid people with their money.

This is all leading up to the point that I'm pretty much done with ICO 41.  I plan to do one more episode to say goodbye and thank the listeners.  Am I done with Crypto and Blockhain?  No. First, there are projects that are NOT ICO's, like Raven, which are awesome. And I'm still fascinated by it on a technical level, and honestly if an application comes up where it would make sense, and which I can create some software that actually solves a real problem, then I may even launch a project of some kind myself, if only to prove that it can be done without millions of dollars. But as to "studying" the phenomenon, I don't see the point of giving it any more attention than it already has, through the huge network of "ICO Review" sites, YouTube promoters, and the bizarre fringe.

One great thing that I found out about myself, though, was that I LIKE the broadcast medium.  I understand how much fun my father must have had, and what must have attracted him to radio in the 1960's.

Writing, finally, because it's better late than never