It says a lot about the Cuban people that the national figure that seems most revered and noted in even more places that Castro, Che , or any of the other modern revolutionaries was primarily a poet, philosopher and writer.

Jose' Marti is everywhere in Cuba. From the multitude of statues in every village and city, to his words inscribed on the entrances of Freemasonry lodges, we see his thoughts and advice.  Quotes like "Happiness exists on earth, and it is won through prudent exercise of reason, knowledge of the harmony of the universe, and constant practice of generosity."

What I didn't quite understand and now do, since I returned from a very brief visit there, is that the 1959 revolution that was engineered by the Castro brothers was in fact an extension of the original struggle of independence from Spain, which occurred in the latter part of the 19th century. And so we see quotes like:

"It is my duty to prevent, through the independence of Cuba, the U.S.A. from spreading over the West Indies and falling with added weight upon other lands of Our America. All I have done up to now and shall do hereafter is to that end.... I know the Monster, because I have lived in its lair--and my weapon is only the slingshot of David."

There is much to see and learn about this small country, but even the most cursory visit approached with thoughtfulness and curiosity cannot fail to lead to a deep impression. I certainly came away amazed by the place. If you consider what this country has accomplished against all odds, and with very, very little help from anyone (particularly after 1993), they have every right to be as proud as I found them to be. With a literacy rate higher than plenty of industrialized nations, and yet operating on what amounts to a horse-drawn, agrarian society, the place is a delight of juxtaposition.

If you go, you should understand that you will certainly be initially viewed as someone with wealth beyond imagination and who can easily part with any acceptable fraction of that wealth in order to make someone's day just a little bit easier.  This will be true - but don't let that stop you from making a meaningful connection, because under that necessary and mercantile veneer sometimes lies a quick and honest humanistic, fraternal response.

My personal opinion based on the short but meaningful visit that I had is that by and large, the Cuban people are proud of who they are, what they have done with their country over the last 60 years, and they do not believe themselves to be political prisoners.  It would best to look very carefully at the messages you receive from those that have strong outside opinions of the place - and instead approach the country with an open mind. Make every effort to have honest conversation with as many Cubans as you can.  Then, draw your own conclusions. 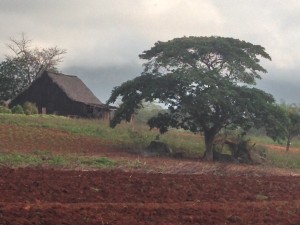 Tobacco fields and a drying hut in Vinales

Writing, finally, because it's better late than never